The CRISPR-Cas immune system and its applications

Our group is studying the adaptive immune system of bacteria and archaea, CRISPR-Cas, both basic biological processes and applied use.

Viruses are a major threat to most life, and in response a range of countermeasures have been developed divided in innate and adaptive systems. Innate systems quickly respond to certain features of infection, examples in humans (and many other animals) are inflammation and the complement system in animals.  Bacterial innate systems are e.g. restriction-modification and abortive infection. Adaptive systems have the unique ability to learn to detect pathogens not previously recognized, and humans use new antibodies to achieve this.

Archaea and bacteria were not thought to have such advanced virus defense, so the recent discovery of the CRISPR-Cas adaptive immune systems, was a surprise. Unlike antibodies, that recognize topological features of pathogens, the CRISPR-Cas system recognizes the DNA or RNA of the virus. The system retrieves short fragments of genetic material, called spacers, from the virus and inserts them into the CRISPR locus in the cell’s genome. The CRISPR is a cassette spacers separated by short repeated sequences. The CRISPR is transcribed into RNA, and the RNA is in turn recognized by CRISPR-associated (Cas) proteins that use the spacer information to locate and destroy matching viruses in the cell.

About half of all bacteria and most archaea have CRISPR-Cas systems, and they play an important role in the continuous battle between cells and their viruses, which affect the ecology and evolution of these organisms.

The ability of Cas proteins to use RNA to guide nuclease ability has been used to develop them, particularly Cas9, as efficient, precise and easy-to-use tools for genetic modification of animals, plants and other eukaryotes. Both genetic modification and change of gene expression can be achieved. The method is widely adopted for research and industrial application but also have a large clinical potential for treatment of genetic disorders. 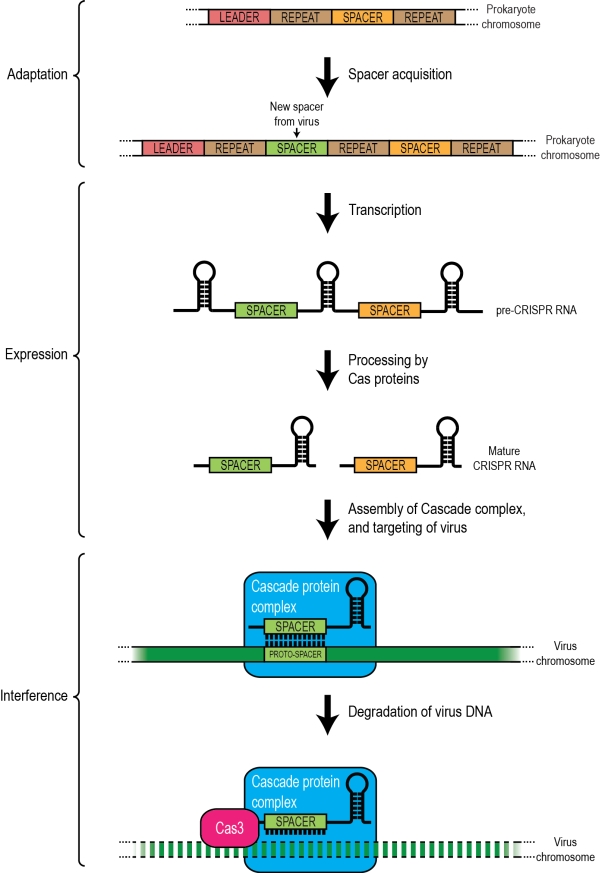